The International Women´s day commemorate the struggles women have been facing to achieve equal opportunities to men, not only in society but as their integral development. There is no doubt we are experiencing profound structural changes in our current society, questioning norms and values with which we have been living historically. The commemoration of this date triggered our interest to research gender opportunity differences.

In Opinaia we have a monthly online survey which is representative of the argentine population where we included a battery of questions to allow us to elucidate how certain aspects of the gender gap as being understood and experienced in Argentina.

We thought it would be best to start with the issue of perception of equality or inequality of opportunities among women and men. To quantity such an issue with asked respondents to provide their opinion regarding the following statement: “Nowadays we live in a society where men have more privileges and opportunities than women”. 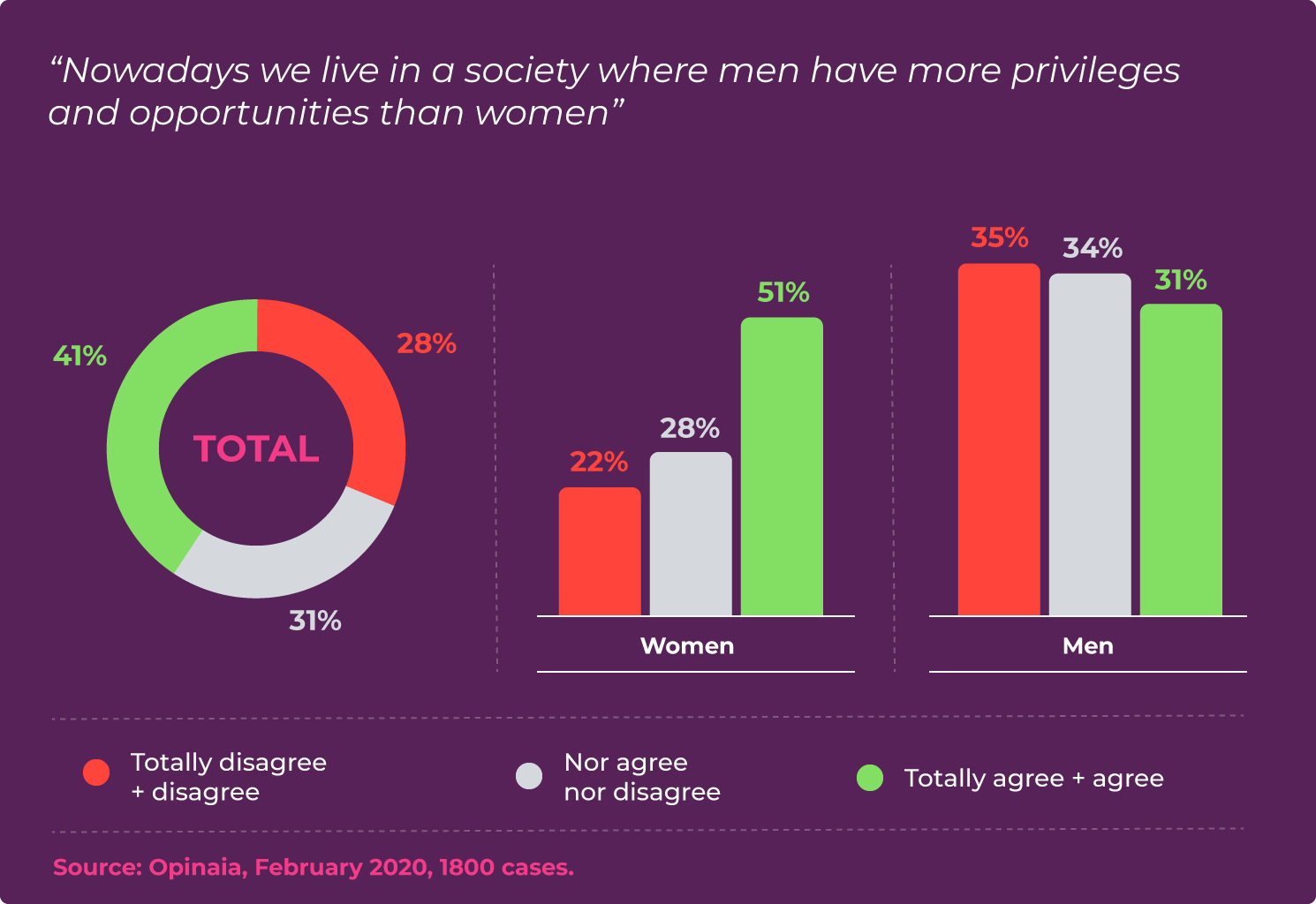 We found divided opinions: 41% of the surveyed manifested agreeing with the statement in comparison to 18% which were in disagreement. A very interesting 31% of the population said not to agree or disagree with the idea that we live in a society where there is a gender gap. If we look at it from a gender perspective, 51% of women against 31% of men were in favor, resulting in 1 every 2 women not perceiving the structural gender gap. If we do a generational analysis, the younger segment (16 to 25 y/o) are the one who agree with the statement the most: 45%. These results lead us to think that there is a perception of inequality, especially among women and the younger generation.

There are differences that are harmful among men and women and its impact are notable in diverse areas. We will concentrate on one of them: economic autonomy. The female employment rate –according the national statistical bureau, INDEC from the third trimester of 2019- is 44% in comparison to a male rate of employment of 64%. This disparity in the work force has multiple factors. One of them is the amount of hours a women employs in non-remunerated tasks such as taking care of the home and others. In a study that Opinaia did in march 2019 we found that women are responsible for the cleaning tasks: they spend 50% more hours in such duties. While women declared spending 13 hours a week cleaning the house, men spent 8 hours. To these 4 extra hours women spend a week in these domestic tasks when they live with a man, how many more hours do they spend taking care of children, the elderly or a sick relative? We asked them specifically to our panel if they had taken care of family or friends that were either kids, elderly or sick during the last week.

The results showed that women invested a third more than men in taking care of other: 50% of women surveyed said they took care of someone last week against 37% of men. The amount of hours employed by women in these tasks was around 21 hours, while men spent 14 hours carrying the same duties. The number of hours rises to 25 among young female adults (26 to 35 y/o) while for males on the same age bracket it decreases to 11 hours a week, leaving the hour gap now to over a 50%. This age bracket coincides with the most active stage of a professional career. These are hours during which women cannot use for their professional or educational development nor their leisure, putting pressures and barriers to their levels of employability. 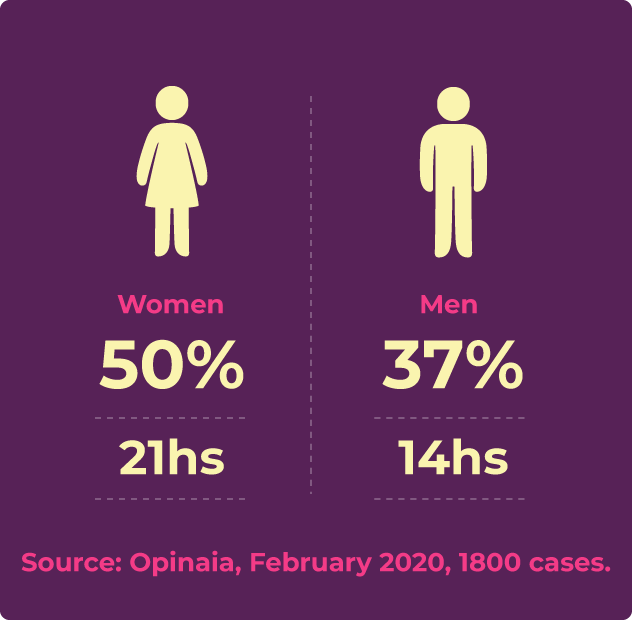 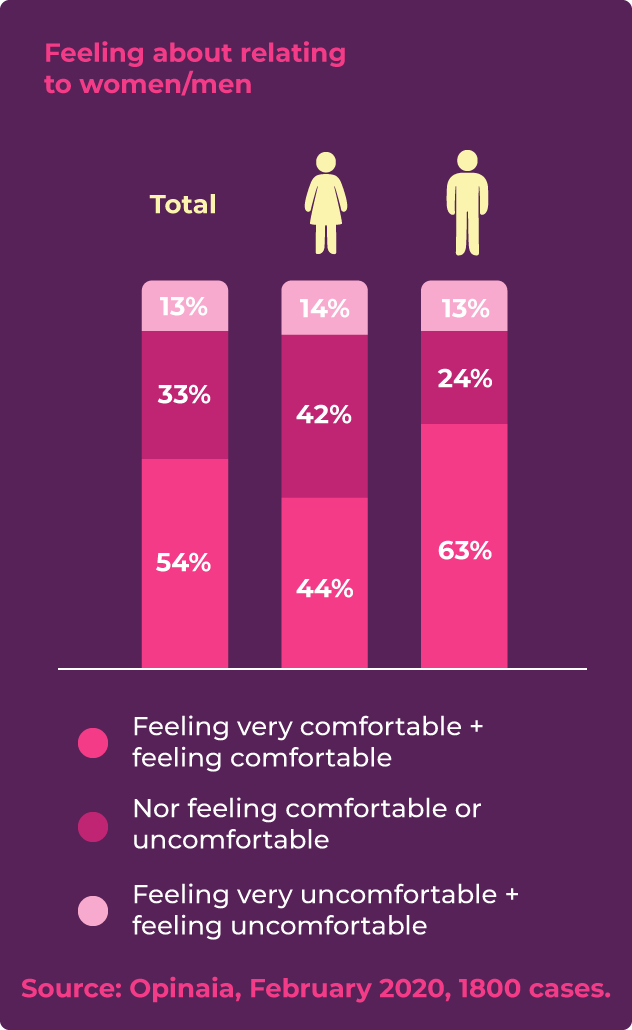 The different ways in which genders are socialized is another pressure point on the gender gap agenda. We find ourselves challenging gender roles, revalorizing women´s contribution to the development of society. During these times, we are revising patriarchal values imparted during the socialization process to achieve in future generations the equality among genders we are seeking. Where there are changes in societies, there are also feelings of lack of comfortableness. This is why we asked how men and women feel today when they interact with the other gender.

A small amount of both women and men declared feeling uncomfortable when relating to the other sex. The differences emerge when looking at the sense of comfortableness. Just 44% women claimed feeling comfortable when dealing with men, while these figures rise to 63% among males. Looking at age differences, we observe that young females of 16 to 25 years old are the ones who feel less comfortable even, with only 22% of them declaring feeling at ease compared to 66% of men of that same age feeling comfortable dealing with men. These results show a clear differentiation with the socialization of genders and how that impacts how they interrelate.

Another element used to indicate gender differences is the way we speak. Ever since we were little we learned to talk and use words without being conscious that language is a social construct. Nowadays a part of society is questioning the way and the type of language we use daily, looking to generate a change that will encompass the differences in all genders. In this sense, inclusive language in Spanish tries to include masculine, feminine and neutral using the letter “e” so as to refer to all genders without imposing one over other. So we set off to figure out the opinions of Argentinean on the matter of its usage.

Our survey showed that 66% of respondents are against their use, only 9% are in favor and 21% are indifferent to the matter. Even though one could expect finding gender differences on this matter, only 11% of women are in favor of using inclusive language compared to 8% of men. Older segments reject their use more: 48% of young people are not in favor of it, 64 % of young adults aren´t either but a majority of 73% of older adults rejects its usage. Secondly we looked into their actual use.

Opinion on usage of inclusive language 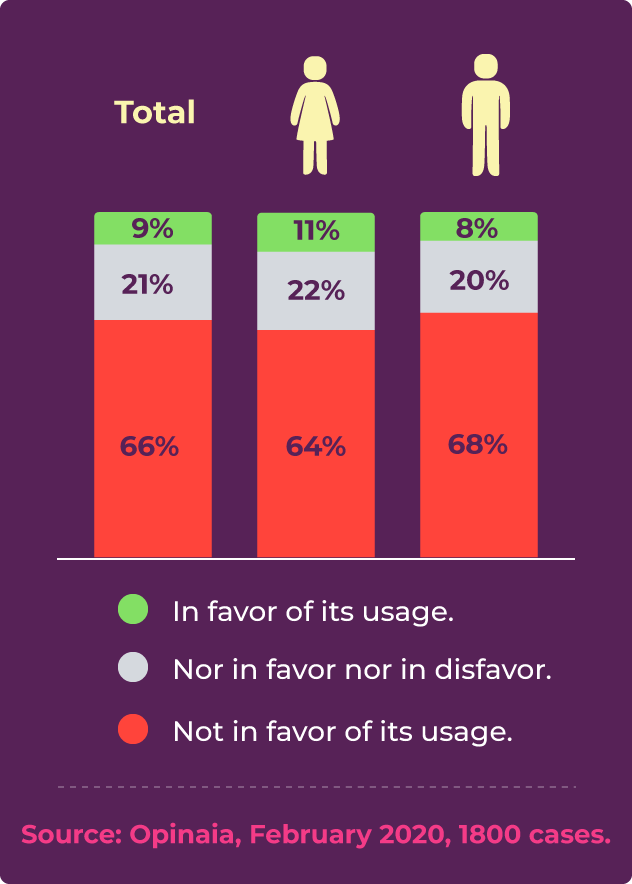 Usage of inclusive language by sex and age

We would like to conclude that we live in a society with a perception of inequality among women and men. The first divergence we find it in the gap of opportunities. Only 31% of men consider they possess more privileges and opportunities than women, where that figure rises to 51% among women. Regarding economic Independence, women spend double their weekly time in non-remunerated tasks such as cleaning the house and a third more taking care of others, especially during the life stage where professional development is the highest. In a day-to-day basis, women feel more uncomfortable dealing with men. And even with respect to inclusive language, one of the measures which are trying to implement to show higher equitability when we talk to each other, its approval rate is very low and so is their usage. The road towards a lack of a gender gap starts by understanding these biases, understanding the different realities that women and men face so we can review certain values and generate a society where both genders perceive having equal opportunities.

> Chek out our article on love conquest

Don't miss out on our future research articles, follow us on social media: